Searching for a defective flash head appeared to be harder than I thought. Most shops just throw the returned heads away or ship it back to the importer. However, the director of Benel, (the importer) was so kind to send my a used housing. I did have to pay 18 euros for shipping. This brings the total costs at €83 so far.

After taking the housing apart, it quickly becomes apparent that the cooling is indeed way too big. 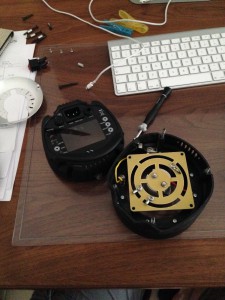 Buying a smaller cooler would ruin the challenge to build the lighting head as cheaply as possible. Lets first try to modify the current cooler instead.

I decide to cut of the corners of the cooler fan. It makes the whole fan round. Surprisingly it fits snugly. There are even some screw wholes in the fan that nicely line up with some holes in the head. 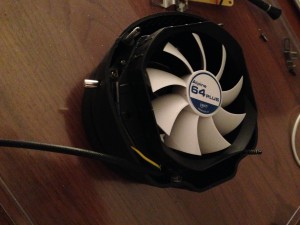 Adjusting the rest of the cooler will take some more time…