After many years over using Nikon DSLRs I decided to move the a system camera in order to save weight. Requirements are that it has a EVF and good lenses and at least a APS-C sensor. With the arrival of Fujifilm X-T1 the time came to change camera.

In most cases this camera works excellent. One thing I did not think of was the use of an EVF in combination with my Falcon Eyes T300-E flash heads. They have 150W modeling light, which result in a very dark EFV with my camera in manual mode at F8, ISO200, 1/500s. Not very workable…

LED heads are become more and more usable because of the availability of high power LEDs. The what-you-see-is-what-you-get feature of continuous lighting is very appealing. Falcon Eyes now has a LED head available, which accepts their modifiers. It has a 100W 10000 lumen LED. So it provides a nice amount of light. 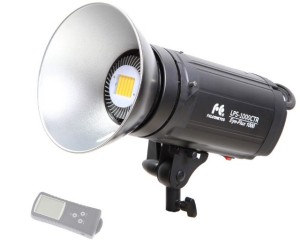 The problem though is, that it costs around €390,-. The whole point of owning Falcon Eyes flashes is that they are cheap.

A little googling results in 100W LED lights for €15,- euros, when imported from China. So I decided to modify my flashes into LED continuous light heads. The three main components I need are a LED light, a LED driver and some cooling. I ordered the LED and driver on Ebay from some fishy looking company. I intent to use a standard CPU cooler to prevent the LED from burning up. Total costs without taxes are €55,-.